This week we will be writing our own stories but only the starter. We will be basing our stories on The Sailing Boat in the Sky. The children begin on the beach and find the different parts of a vehicle which they then put together. Watch the video below to remind yourself of the story.

Stories with Rosie - A Sailing Boat in the Sky

A story opener can start with a question, for example, what is that odd object lying at the bottom of the mountain?

A story opener can start by setting the scene, for example, the early sun rose over the white, snowy mountain making the sky light up in pink, orange and red.

A story opener can start by introducing the character, for example, my name is Miss Apsey and I am here to tell you about the time I saved someone's life.

Open up the document below and read the story openers.

Can you group them into these 4 groups? Which ones do you like? Which do you not like? Why?

Now you are going to be improving sentences by adding expanded noun phrases. When you open the document, you will need to choose the page for your environment. You should know what environment your vehicle is being built for.

Once you have opened the document, first, highlight the noun in each sentence. Next, come up with some adjectives to describe the noun and rewrite the sentence. If you use more than one adjective, you should have a go at including commas in the list of adjectives. Click the link below to watch a video on commas in a list.

Open the document below to complete your plan. Look at the example to get some ideas.

Today is the day you write your story! Use your planner to write your story opener. Remember, you are not writing the whole story!! Look at the example below to get some ideas. 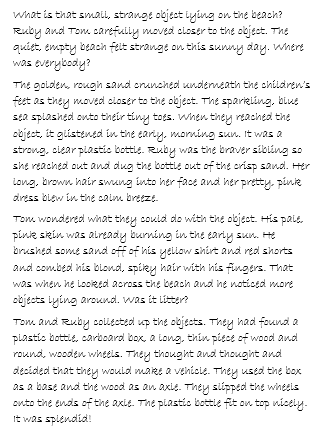